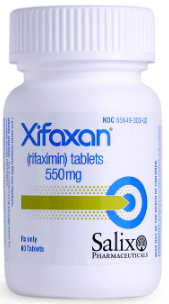 If you are suffering from Irritable Bowel Syndrome (IBS) and/or Small Intestine Bacterial Overgrowth (SIBO), there’s a good chance that your doctor will talk to you about Xifaxan. Xifaxan is the brand name for Rifaximin and is produced by Salix Pharmaceuticals.

Xifaxan is an FDA-approved drug for treating the symptoms of IBS-D. It’s an antibiotic that alters your gut bacteria with a goal of reducing your symptoms of IBS.

You take Xifaxan three times a day for two weeks. It can be taken with or without food. According to the drug company, the average relief in a clinical study was 10 weeks, but it can provide up to 6 months of relief from IBS symptoms.

Xifaxin is available only by prescription. You should consider speaking to a Gastroenterologist (a doctor that specializes in the digestive system) to discuss if Xifaxin might help you.

The drug is not cheap and could cost close to $1,500. In my case, the Gastroenterologist referred the prescription to a specialty pharmacy that works with insurance companies to get coverage approval. They were able to get approval from Aetna within about a week. By combining the insurance benefit with a special program from Salix Pharmaceuticals, my out-of-pocket cost was zero. While I didn’t get the drug as easily as going to my normal pharmacy, it was well worth it.

I started seeing results within just a few days of taking Xifaxin. The biggest change was in my stool, which became more regular in appearance and softness. The change in my stool remained for a week or two after finishing the drug.

But that wasn’t the change I was looking for–the main thing was relief of gas, constipation and other symptoms of IBS and SIBO. I have been able to tackle these by combining Xifaxin with a low FODMAP diet.

I thought of Xifaxin as a way to jump start my new diet and the relief it could deliver. I don’t want my symptoms coming back every few months. Although you can take Xifaxin for up to three courses, I want permanent relief.

It’s been nearly six months since taking Xifaxin, and I’m a believer. But it’s important to stress that a big part of this (and keeping my symptoms from coming back) is changing my diet to reduce FODMAP intake.

The information on this site is not a subsititute for professional medical or nutritionist advice. If you have any questions about the content on this site, please contact us.